With any relatively new and revolutionizing product in the market, there is bound to be some misinformation regarding that can influence our decisions. Here are some common misconceptions about LED Lighting that are doing the rounds. 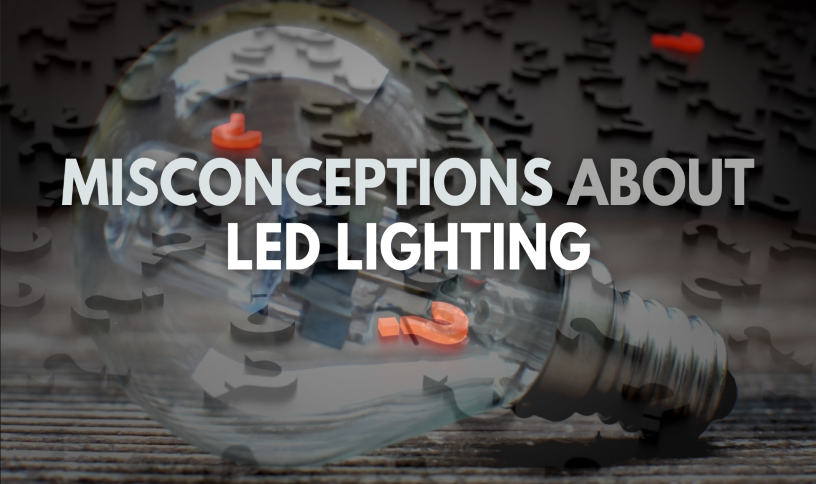 The invention of LED Lighting has completely transformed the way we think about our lighting needs. From incandescent to fluorescent lights to LEDs, the change, although gradual, has led to a growing demand for long-term and sustainable products that can illuminate our lives for the better.

LEDs have technically been around for decades and their application across different categories has been driven by its various advantages over other forms of artificial lighting sources, such as better efficacy, life span, eco-friendly materials, etc.

Nevertheless, with any relatively new and revolutionizing product in the market, there is bound to be some misinformation regarding that can influence our decisions. Here are some common misconceptions about LED Lighting that are doing the rounds.

1. Too expensive – Doesn’t have an impact on overall savings

This misconception rose from the fact that LED lighting products are priced at a higher rate than regular fluorescent and incandescent lights. However, you only have to pay up-front once when it comes to LEDs since they have the ability to compensate that cost with their overall efficiency and durability – delivering better value for money in the long run. Whatever you spend on buying or installing LEDs can be recovered in lieu of the savings arising out of lower electricity bills, giving you a quicker return on investment (ROI).

A great example can be witnessed in Madison Heights, MI where city officials are planning to replace all of its streetlights with energy efficient LEDs. They believe this development can lead to energy cost savings of around $97,500 annually, which could automatically pay for the overall project costs of nearly $412,000 within a span of four years itself.

Furthermore, those who opt for LED lights can also be eligible for rebates according to US Department of Energy guidelines.

Lighting products that can last forever are what bright dreams are made of; alas, it’s far from reality. LEDs are certainly designed to have a longer lifespan and a longer average rated life than most lighting products, but just like any machine / device, they too begin to lose their brightness eventually. Having said that, LEDs have a much longer lifespan (50,000 to 100,000 hours) though, which is significantly longer than halogen, incandescent, and CFL bulbs; so, you have nothing to worry about when you choose this lighting option.

Another common misconception around LED lights is that it contains chemicals and hazardous substances that can affect not just our health, but negatively impact the environment as well. The truth is, LED bulbs do not contain mercury, or any other hazardous metals or chemicals. On the other hand, CFLs and fluorescent bulbs contain a very small amount (3-5 mg) of mercury, which raises risks of air & water pollution during disposal. When LED luminaires eventually degrade, no special procedures are required to dispose them off. Your best bet is to buy lighting products that are rated & certified by UL and RoHS for their safety. 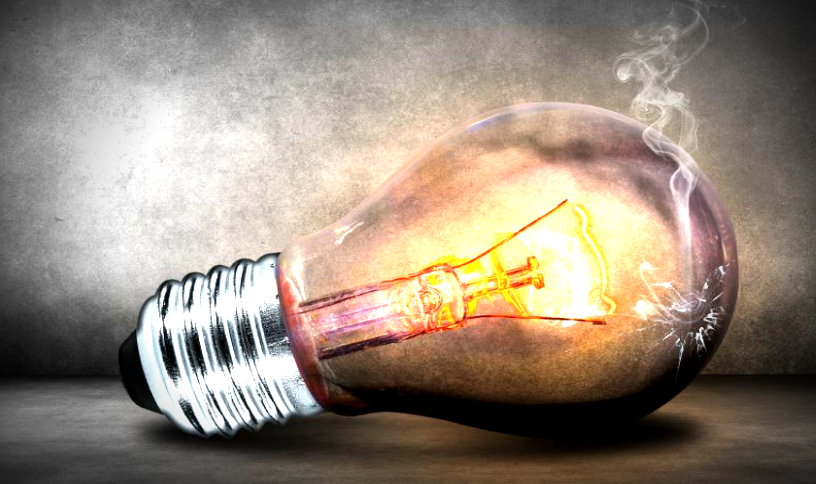 Smoke Emitting from an Incandescent Bulb

4. Heating – either gets too hot or no heat distribution

Misconceptions can often create all kinds of confusion in the mind of buyers, and it can be seen in the LED lighting market as well, especially when it comes to heating. While some say LEDs can get too hot, others may concur that they don’t generate enough heat. In fact, LED lighting products often come with a heat sink – an object used in the absorption and dissipation of heat generated from an LED and LED module. Unlike incandescent bulbs, it avoids overheating of the product by allowing the heat to dissipate from within the luminaire towards an external point, so it can function without any problems.

5. LEDs cannot be controlled or dimmed

One of the biggest issues that some people seem to have with LEDs is that they are brighter than most lighting products, resulting in glare – visual discomfort caused by exposure to extremely bright light. While there are some high-power LEDs that can produce on-axis luminance of over 100 million cd/m2 (nits) (roughly 1/16th brightness of the sun), further advancements have allowed us to manage this problem. LEDs can now be used with a combination of refraction, diffusion, shielding, indirect lighting, etc. to reduce contrast and any chances of glare. Additionally, LEDs come in various CCT (Corelated Color Temperature) options that allow you to choose how bright you want your light to be. For example, a 3000K LED bulb will produce a softer light in comparison to the one with 5000K.

What’s more, the LED lighting market offers a range of different variants for various lighting needs. You can find products that have been designed with built-in drivers for power control according to your specific requirements. You must remember though that not all LEDs are dimmable. The driver must be designed accordingly and should be compatible with the right type of dimmer for the luminaire.

6. Not resistant to external elements – Cannot operate in extreme conditions

One of the major concerns of buyers in the lighting equipment market is whether the product they are interested in is resistant to external factors like vibrations, fire, or, explosion, especially in hazardous locations. Thankfully, you can find variety of IP and IK rated LED lighting variants that are designed to withstand extremities. Such fixtures can be used in different weather conditions and can even be resistant to dust and water. There are several standards of IP ratings that can be chosen on the basis of your application requirement.  It includes:

There are variants of LED lights which are specially designed for working in high-risk locations that are prone to fire or explosions. Such LEDs have a rugged, explosion-proof construction, making them ideal for rough conditions. The National Electrical Manufacturers Association (NEMA) in the United States defines heavy duty electrical enclosures for different lighting categories depending on access to hazardous parts and additional type-dependent designated environmental conditions. Such IP rated and NEMA standard LED products are typically seen in industrial and hazardous locations.

Since the first image that crops up in our mind when we think of LEDs is that of a white bulb, it is often assumed that there are hardly any color variants offered by LED companies. However, that’s far from being true. In reality, you can find lots of luminaires that integrate multi-colored LEDs seamlessly into your surrounding space, create different ambience, and evenly distribute light. Furthermore, such lighting variants also come in variable color correlated temperature (CCT) options, which can be controlled by dedicated switches.

8. Installing LEDs can be inconvenient – Changing one or changing all

We understand that switching to a different lighting product may seem like a hassle at first, be it 5 or 15 fixtures. However, you can always start with the most used areas and lights, and then gradually move on to other fixtures. Installing LED lighting is an extremely easy process and won’t take too much of your precious time. Moreover, the time you invest in installing LEDs will yield rewards in terms of longer product lifespan and energy savings.

9. LEDs are not as bright as incandescent bulbs

Some people often believe that an incandescent bulb is brighter than its LED counterpart. This myth arises out of the fact that LEDs are not available in high wattages like a traditional bulb. However, what is interesting to note here is that wattage is not the indication of brightness, it is the lumens that measure the brightness, more the lumens brighter the light is. While a traditional bulb is measured according to wattages, an LED is measured in terms of lumen per wattage.

For example, a 12-watt LED luminaire may produce 800 lumens, while a 12-watt incandescent bulb may produce somewhere around just 100 lumens. Therefore, it is safe to say that LEDs are not just the right lighting product in terms of brightness, but energy efficiency as well.

The aforementioned misconceptions have been around for a long time, but thankfully, so have the LEDs that continue to prove their importance and significance in the realm of sustainable lighting. Feel free to fulfil your lighting needs without worrying about extra expenses because this is an investment that is guaranteed to provide positive returns in the future. 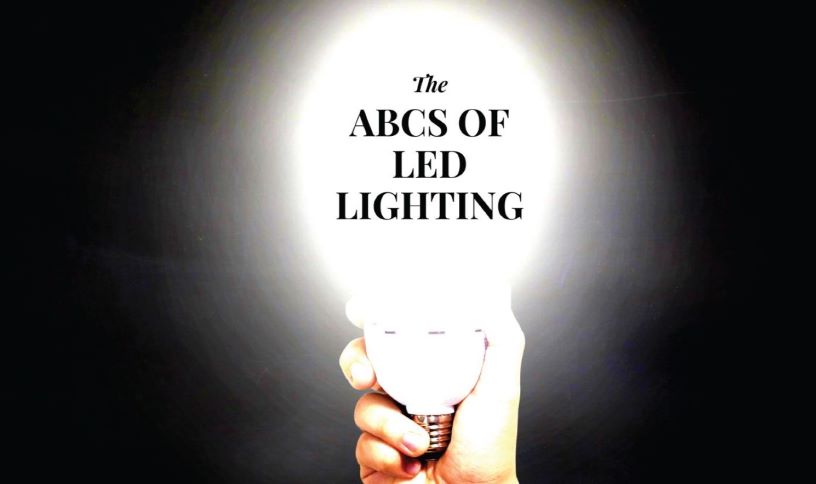 When it comes to LED Lighting, knowing its basics can go a long way in making sure you find the right product that fits your requirements. Let us start from the beginning; the ABCs of LED Lighting! 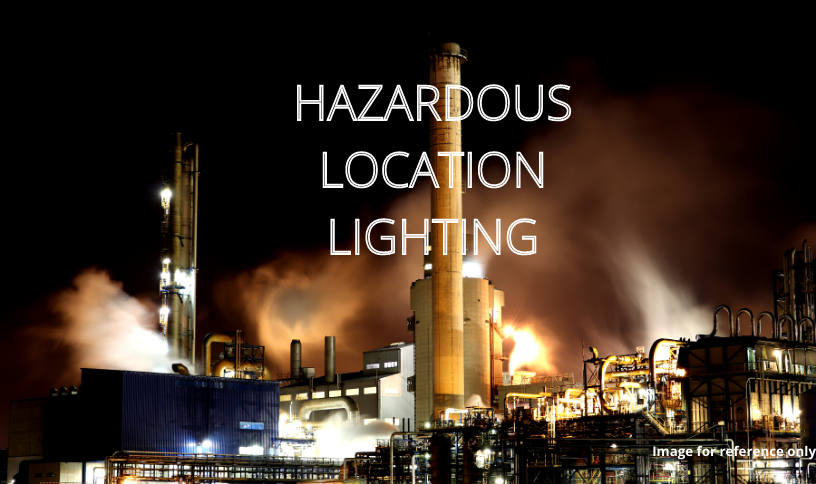 Hazloc LED lights come with various certifications according to rigid industry standards. They can be divided into various Class, categories and divisions on the basis of risk involved. 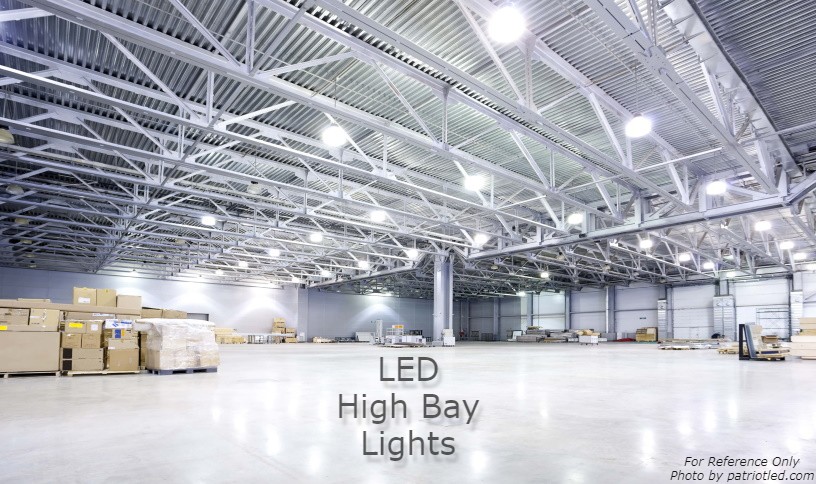 7 Things to Remember Before Investing in High Bay LED Lights

High Bay LED lights are specially designed lights, commonly used in large spaces with ceiling height ranging from 20 to 40 feet. However, there are several factors that may impact your choice of LED High Bay Lights. In such circumstances following the below mentioned points can simplify the selection process for you. 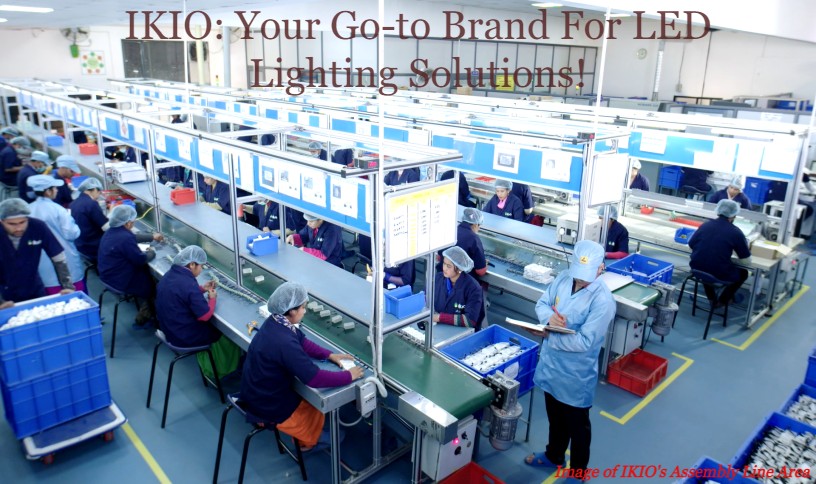 Choose us, not them: Why IKIO is your go-to brand for LED lighting solutions

We have not one, not two but seven different reasons for why you should choose IKIO as your LED lighting partner over other lighting brands. 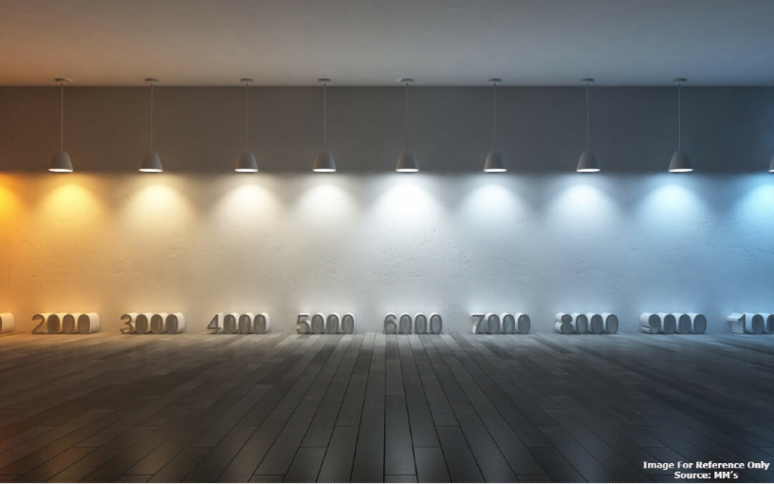 Choose The Ideal Color Temperature For Your Commercial Or Industrial Spaces. Here’s How!

Does your next project entail installing huge lighting setups? Knowing the science behind the color temperature will help you make the most of your LED lights and deliver excellent results. 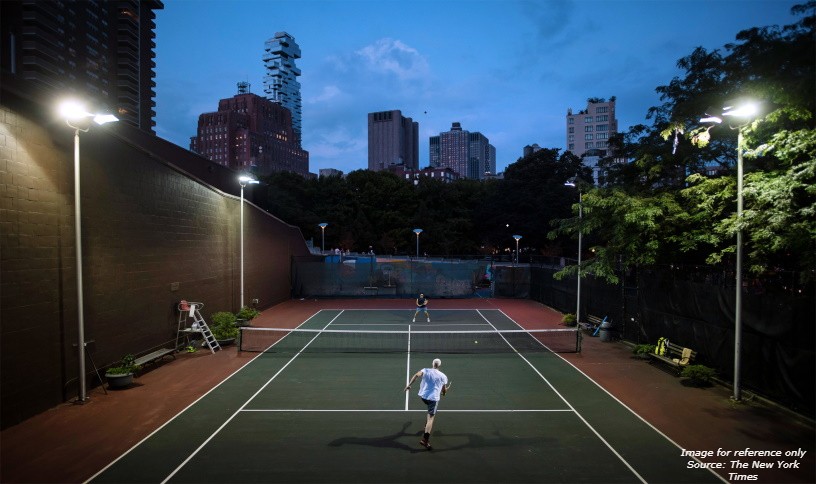 Understanding the Relevance of Vertical & Horizontal Illuminances in a Lighting Design 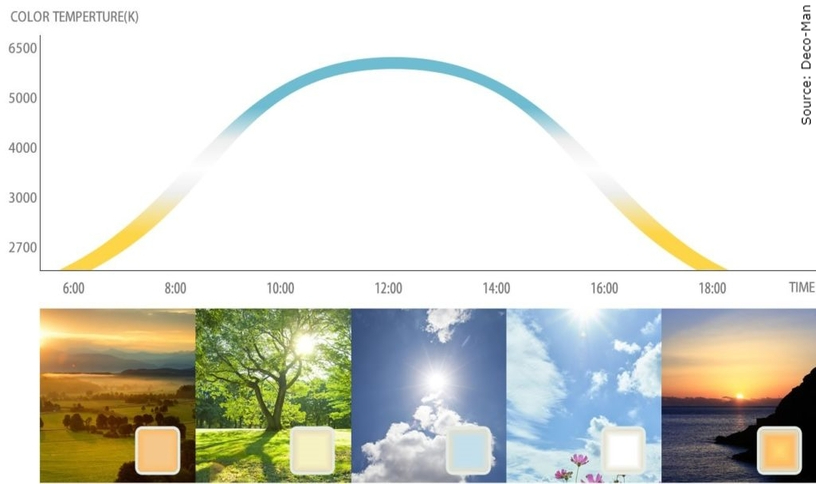 Ever heard of lighting that can impact and improve your life and surroundings? If not, go ahead and read this blog to learn about the human centric effects of smart and sensor ready LED solutions. 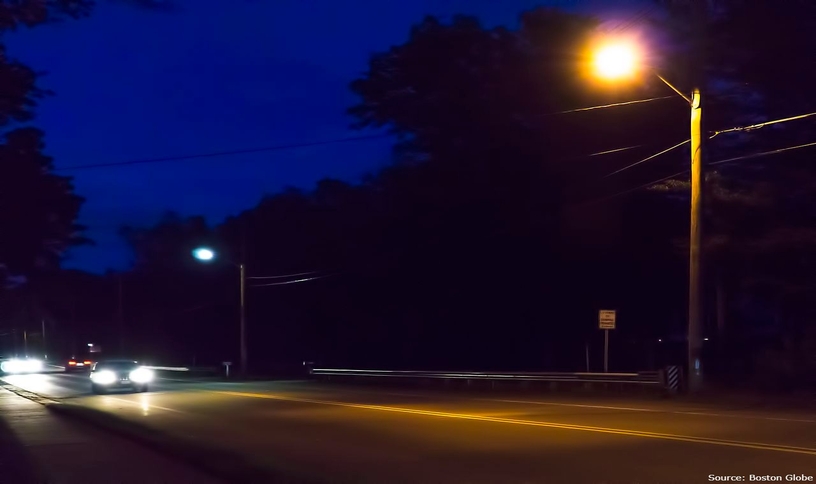 No matter how brilliant the illumination of an outdoor light is, it can lose its impact if the glare factor isn’t addressed and dealt with properly. In this blog, we have offered a thorough insight on what glare is and how it can be resolved in lighting. 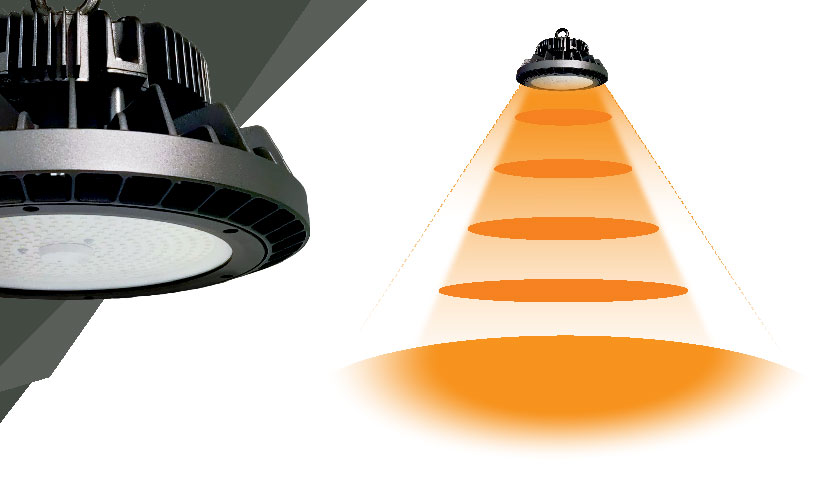 How to Choose the Right Light Levels for Your Commercial or Industrial Space!

When undertaking a commercial or industrial lighting project, how do you decide on the number of lights to use? In this blog, we discussed the science behind light levels and how important it is to accurately deduce and implement them to achieve the desired illumination in any space.